The Japanese Institute of Landscape Architecture (JILA) will be celebrating its 90th anniversary in May 2015, and is pleased to host an international competition for design proposals envisioning future Tokyo with/without parks in 2105, 90 years from today.

The competition invites students and young practitioners in design, planning, research, and related fields to rethink the raison d’etre of the park, one of the greatest urban inventions for modern society, and to propose innovative visions for future Tokyo with/without parks. 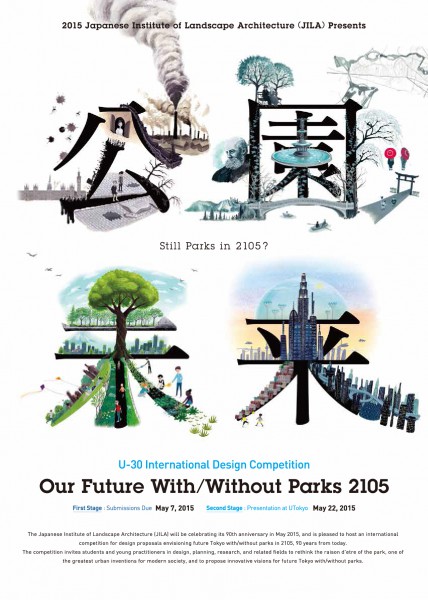 Japanese Institute of Landscape Architecture is pleased to announce the winners of the 2015 U-30 International Design Competition.

After the 2nd stage review, the plagiarism, that the finalist’s work (B207) committed, has been defined. For detail, please see the link.

We hereby announce the result of 1st stage review and the list of 9 finalists and winner of honorable mentions.
The finalists’ ID# are the followings;

The finalists will present their proposals on May 22 at the University of Tokyo.

This is the title of an essay by Kiyoshi Inoshita in 1928. At that time Inoshita was the manager of the Department of Parks at the Tokyo City Government and one of the best practitioners in landscape architecture in Japan. He was right in the middle of creating a number of urban parks in Tokyo, as the city was in the process of reconstruction from the 1923 Great Kanto Earthquake.

Considering his career and practice as a great park designer, Inoshita’s argument in the essay seems paradoxical. However, he believed that parks would no longer be needed if we could realize a future society where critical urban problems including public sanitation and overpopulation were solved by highly developed technologies.

In Inoshita’s essay, “100 years later” meant 2028. Yes, we are almost there, but we still do have urban parks. Why do parks still exist in the city? How do they function and for whom? Do parks need to be everlasting fixtures in our city fabric? Is there any possibility that parks will be replaced by newly invented urban infrastructures?

Tokyo (any scale, any place)

– All documents should be in English or Japanese

– Please include the following materials/information for your proposal:

Comments from Jury Members are uploaded!